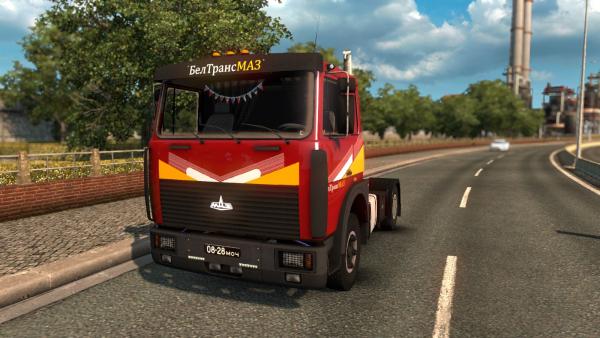 The MAZ-6303 truck was developed by the Minsk Automobile Plant in the late nineties. The car was produced in many modifications, ranging from dump trucks and ending with tractors. Over the years of production, the car has undergone several improvements, which has a positive effect on its technical characteristics. The truck, built on a base with a 6x4 wheel formula, was equipped with fuel tanks from 350 to 500 liters, which made it possible to travel long distances without additional refueling and even transport three-axle MAZ-9758 semi-trailers, which differ in considerable capacity. In addition, freight transport was able to work as part of a road train and met the technical requirements for the transportation of TIR.

The MAZ-6303 truck mod for Euro Truck Simulator 2 was recreated in very good performance. The authors implemented two types of cabins and interior interiors in exactly the same way as the original ones, with prescribed animation of the instruments on the panel. In the trucker's garage or car dealership, a choice or replacement of chassis options awaits, of the four available, a selection of engines for your needs, or an arrangement where an ordinary truck tractor can be converted into a refrigerator, dump truck, onboard, or an option with an awning. In the ETS 2 simulator, the new addition supports the popular DLC cab accessories, contains several characteristic skins, its own set of sounds and controls, as well as a small but useful set of original elements for external tuning.

The MAZ-9758 three-axle semi-trailer is produced in several types of modifications, from the refrigerator to the platform, with a payload capacity of up to 26 tons. The trailer is fully adapted to...