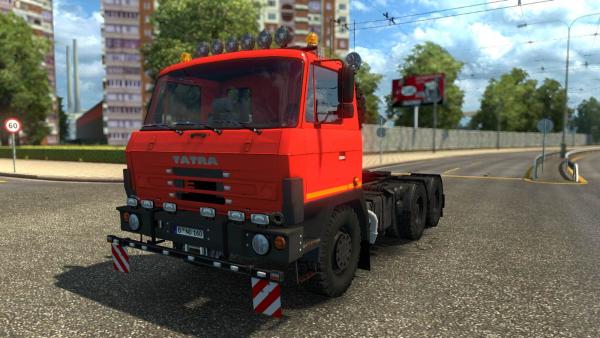 Heavy vehicles of the Tatra 815 series begin their history in 1983, when the first copy of a truck drove out of the gates of the Czech Tatra Automobile Plant. Cars were produced in many modifications, ranging from road and construction equipment, and ending with tractors, the supply of cars was carried out on the markets of Eastern Europe and the Soviet Union.

The mod of the Tatra 815 truck for Euro Truck Simulator 2 is built on the chassis of a tractor with a 6x6 wheel formula, when creating it, the authors used an original high-quality three-dimensional model. The developers of the modification have implemented fifteen engines with power from 300 to 1300 horsepower and twenty gearboxes, which allows carrying out tasks of transport companies for the transportation of heavy cargo. The virtual truck includes a classic interior with prescribed animation and a lot of optional cells for installing additional accessories located on the body. ETS 2 simulator add-on delivers a lot of pleasant game hours.

Dear user of the site, carrying out the transportation of goods on the virtual roads of Europe, for a variety of gameplay, do not forget to download and install new maps for any version of the simulator ETS 2!
Tatra truck tractor
Previous modNext mod

MAZ-6303, the brainchild of the Minsk Automobile Plant, has proven itself on the roads of the CIS countries. A number of modifications ranging from dump trucks to truck tractors allowed the car to...