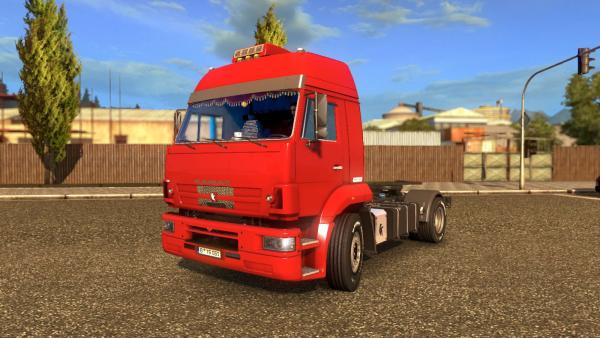 With the new mod, the players have the opportunity to add several models of titanium of the Russian automobile industry, the KamAZ truck at once. The developers of the add-on have embodied in the model for the ETS 2 simulator all the best qualities that a real car is capable of.

New powerful trucks have many functions, both improvements and changes in appearance, driving performance and characteristics. The attention of virtual truckers will attract several types of cabs with the choice of roof style, as many as six types of chassis for every taste and a dozen engines with their sound power up to 600 horsepower. In addition, a fully functioning dashboard and a well-designed cabin interior are well-made. The car will perfectly fulfill the orders of the transport companies of the South Region map, which will fit perfectly.

Well, that’s not all, in addition, the mod developers have added a huge assortment of tuning accessories and spare parts. Among them are headlights, radiator grills, bumpers and much more, which will allow you to create your own unique look of the Russian tractor in Euro Truck Simulator 2.

In addition, you can download BDF trailers for KamAZ:

Autonomous Russian truck KamAZ-6460 Turbo Diesel its appearance resembles an exclusive car. The truck will perfectly fit into the virtual world of the simulator ETS 2, thanks to the unusual exterior....