After applying the mod, the windows and mirrors are over lightning. How to...
WE IN VK
SUBSCRIBE
Mods for ETS 2 simulator / All trucks / Russian trucks / MAZ 5440E9 and 6430E9 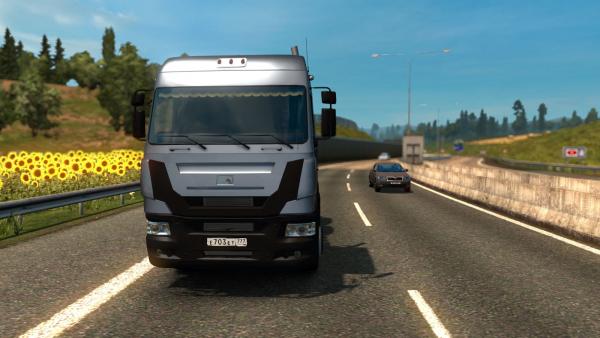 The line of MAZ 5440 tractors has become the top among all previously produced cars of the Minsk Automobile Plant. The low price, together with excellent driving performance and modern components and assemblies, allowed the truck to occupy a worthy competitive niche among cars of this class. MAZ 5440E9-520-031 is equipped with an automatic transmission, is equipped with an imported Euro-5 environmental safety standard engine and reinforced suspension, which in turn allows the operation of a lorry in road conditions with poor quality of pavement. When comparing with the MAZ-504 and MAZ-515 cars produced at the same plant several decades ago, one is amazed at the flight of engineering and progress.

The MAZ 5440E9 and 6430E9 truck mod for Euro Truck Simulator 2 offers the virtual driver a choice of two types of chassis with 6x4 and 4x2 wheel formulas, the same number of cab types on which you can install the bumper you like, in addition to this, the trucker is given a choice of several typical typical wheels . The ETS 2 player is available with a domestic engine with its own set of sound effects. Well, we can especially note the qualitatively reproduced original interior of the cabin with the support of the popular DLC Cabin Accesories, the design of which at first glance resembles the classic Soviet style.

The high-quality mod of the DAF 95XF tractor unit will fit perfectly into the world of gaming automobile tracks not only in standard locations, but also in copyright maps. The developers have...

The virtual truck ZIL-4421, produced since the beginning of the nineties at the Likhachev automobile plant, has the maximum resemblance to a real car. Authors added original wheels, a cabin, a...