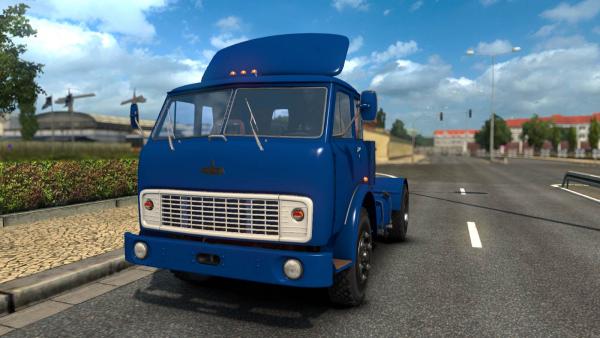 The prototype of the Soviet MAZ-500 truck was produced at the Minsk Automobile Plant in 1958, and since 1963, when the first prototype trucks began to go off the assembly line, and until 1977 their mass production was established. A new engineering solution for locating the engine under the cab made it possible to reduce the weight of the car and increase its length, thereby increasing its load capacity by 0.5 tons.

The MAZ-500 truck mod for Euro Truck Simulator 2 is built on a truck tractor frame; six chassis with wheel formulas are available along the chassis: 4x2, 4x4, 6x2 and 6x4. Virtual truckers of the ETS 2 simulator will noticeably add the mood and sets of power units from four engines with power from 150 to 240 horsepower and three five speed gearboxes, which is very useful for overcoming difficult routes of the map of Severe Russia. The set of items for external tuning is very diverse, among the accessories you can find many original spare parts and functional equipment to give the truck maximum personality.

Particular attention should be paid to the interior of the cabin, the authors of the modification have for sure recreated four options for every taste and budget. In addition, there are replaceable steering wheels, gearshift knobs, trim and upholstery of the instrument panel, it is possible to place many characteristic accessories, vintage items, tools and other additional equipment in the cabin.

Dear user of the site, traveling on the roads on the domestic truck, to feel like a real Russian trucker, we recommend you to download and install the mod Russian radio stations for any version of ETS 2 simulator!
MAZ truck tractor
Previous modNext mod

A series of heavy trucks Volvo FM is presented in Euro Truck Simulator 2 on the tractor chassis, if desired, the player can choose the most suitable wheel formula for the intended tasks, as well as...