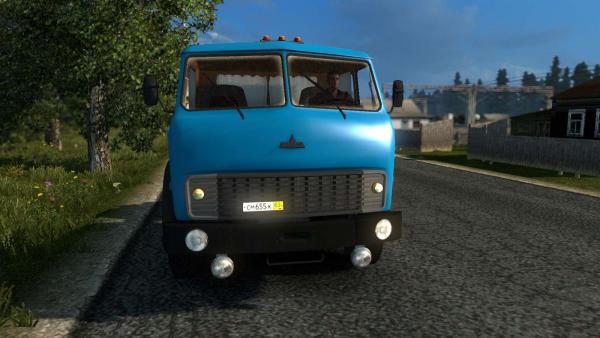 The MAZ-504 truck tractor from the Minsk Automobile Plant turned out to be a breakthrough development for the mid-sixties, when its production was mastered. Built on a chassis with a 4x2 wheel arrangement, it embodied all the latest innovative design solutions, including a completely different engine, hydraulic power steering, telescopic shock absorbers and much more. The car had a shortened base and a modern, at that time, cab, which corresponded to European standards for trucks. Some instances of trucks are still found on the roads of different parts of our country, so a rare car will look very useful on the routes of the map of Siberia.

The mod of the Soviet truck MAZ-504 for Euro Truck Simulator 2 for sure repeats the outlines of a real prototype. The authors of the automotive add-on to the ETS 2 simulator tried with confidence to implement the characteristic physics of behavior and control, and a set of individual sound palettes perfectly complement the similarities to the virtual fellow. From the technical filling, the driver has two engines and the same number of gearboxes, in addition, the original wheels are included. A precisely recreated interior with a genuine instrument panel completes this miracle of Soviet engineering.