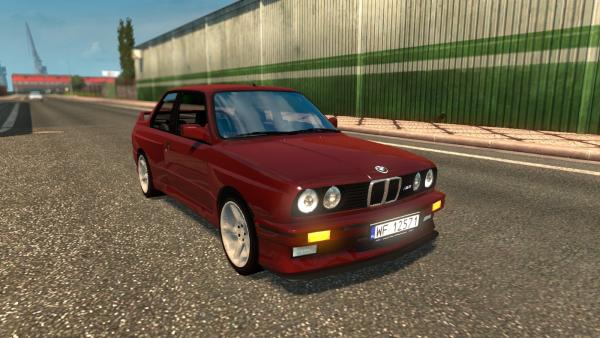 The small car BMW E30 first came off the assembly line in 1983, and was produced for ten years, until 1993. Over the entire production period, about two million copies were produced, some of which can still be found on the roads of both our country and abroad, for example, in our version, it will be nice to conquer the virtual roads of Italy map in a passenger car. Modifications of a passenger BMW were carried out in a four-door and two-door sedan, cabriolet and station wagon bodies, equipped with engines from 90 to 238 horsepower, with a volume of 1.8 - 2.5 liters, respectively.

Mod passenger car BMW E30 M3 for Euro Truck Simulator 2 is made in a typical sports two-door version of the body. If desired, in a garage, or when buying at a car dealership, a trucker can choose alloy wheels, a suitable engine and install a tow bar to your taste. The authors realized the original interior of the cabin with functional instruments and mirrors, the driver of the ETS 2 simulator will be pleasantly surprised by the ease of operation, thanks to the qualitatively prescribed characteristic physics of behavior.