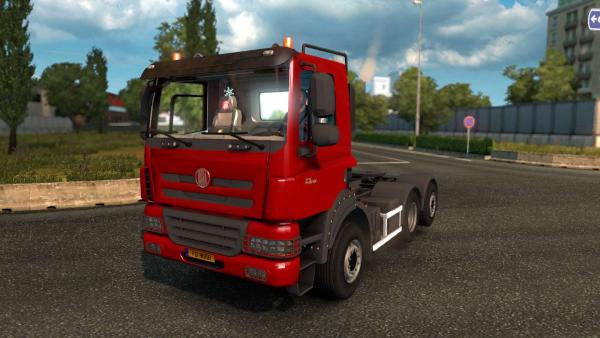 Czech-made Tatra trucks are well known to the older Soviet generation. In the days of the Soviet Union, trucks of this brand were easy to meet in any corner of the Union republics. Unfortunately, after the collapse of the Socialist camp, for a car factory with more than a century of history, difficult days came, as the western auto market for heavy trucks was long divided between large auto concerns and could not stand the competition. And at the end of 2011, the company's engineers, together with the DAF Trucks designers, introduced the new Tatra Phoenix truck, which symbolized the revival of the automotive giant.

The mod of the Tatra Phoenix truck for Euro Truck Simulator 2 has a rather modern look and will fit perfectly into the landscape of the highways of the MHAPro Map EU map. When buying a virtual trucker of the ETS 2 simulator, two vehicle options are available: a truck tractor and a tandem with a set of BDF trailers. Externally, the car is practically no different from its real existing prototype, the authors with thorough accuracy reproduced not only the external outline of the cabin, but also the interior of the cabin. The developers of the modification realized the dream of many players in the transportation of goods in the back, which can be achieved by taking an invisible trailer. A heavy vehicle is very convenient to drive, thanks to the qualitatively prescribed characteristics of behavior.

Dear user of the site, carrying out the transportation of goods on the virtual roads of Europe, for a variety of gameplay, do not forget to download and install new maps for any version of the simulator ETS 2!
Tatra truck
Previous modNext mod

A joint brainchild of Spanish engineers and designers of DAF Trucks, the Pegaso Troner truck tractor will begin to plow the vast expanses of endless roads Euro Truck Simulator 2. The truck mod has...

The release of the MAZ-504 tractor at the Minsk Automobile Plant was a major breakthrough in the history of the Soviet truck industry. Modern engineering solutions of that time put the new truck on a...

The world famous Italian manufacturer of trucks in 1992 began production of EuroTech cars, and in 1993 EuroStar. Over ten years of production, more than a thousand different modifications of the car...