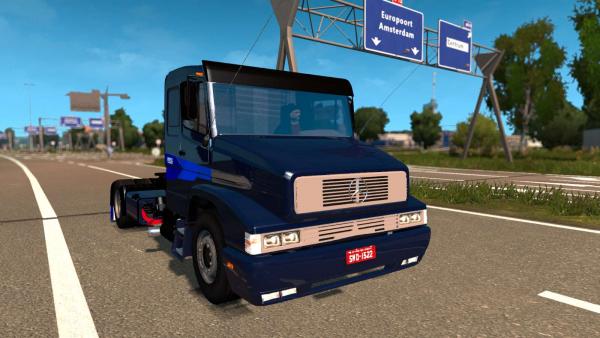 The Mercedes-Benz LS truck tractor was developed by the designers of the automotive giant Mercedes in the first half of the nineties of the last century, exclusively for South American countries. The truck, as well as MB LS-1934 oriented to the South American states, has an engine compartment typical for this region of the engine compartment of the power unit for trucks.

The mod of the truck Mercedes-Benz LS for Euro Truck Simulator 2 for certain repeats the appearance of its really existing brother. The virtual tractor has a complete set of four engines with a capacity of 354, 381, 408 and 445 horsepower, a chassis with a 4x2 and 6x2 wheel arrangement and a rich arsenal of spare parts for tuning, among which you can find gas tanks, antennas, radiator grilles, tinted windows and much more that with ease in any garage of the ETS 2 simulator will help to change the appearance of the car. In addition, the authors managed to recreate the original interior of the cabin and prescribe a unique set of sound.

Dear user of the site, carrying out the transportation of goods on the virtual roads of Europe, for a variety of gameplay, do not forget to download and install new maps for any version of the simulator ETS 2!
Mercedes-Benz truck
Previous modNext mod