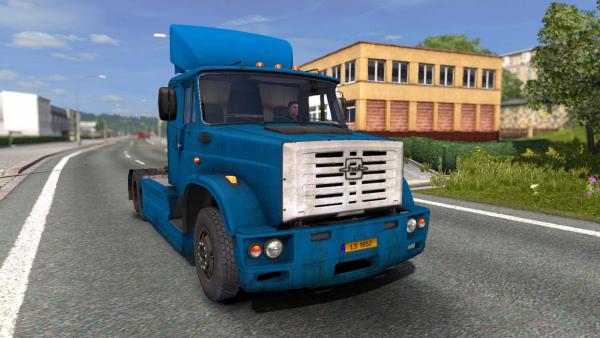 During the Soviet era, Soviet trucks occupied a major niche in the freight transportation market. But with the collapse of the Soviet Union, a large stream of foreign cars poured into the vastness of Russia. In conditions of high competition, Russian manufacturers had a hard time, so in the early nineties the engineers of the Likhachev plant developed a radically new ZIL-4421 truck, which was supposed to occupy a worthy niche in the car market among inexpensive and easy to maintain and operate heavy trucks.

The mod of the ZIL-4421 truck for Euro Truck Simulator 2 is made in excellent quality. The authors have done tremendous work to give the maximum similarity between the inner part and the external appearance with a real prototype. Corresponding textures were added, giving the truck the effect of slight wear, which the virtual trucker of the ETS 2 simulator can install if desired. The wheelbase of the chassis is presented in two versions, 2x4 and 6x4, the developers of the modification implemented the original soundtrack, added characteristic wheels, and placed a high-quality instrument panel in the cockpit.

The addition is perfect for fans of author's maps from the Russian location. The new ZIL will fit perfectly into the world of native virtual roads.

Dear user of the site, traveling on the roads on the domestic truck, to feel like a real Russian trucker, we recommend you to download and install the mod Russian radio stations for any version of ETS 2 simulator!
ZIL truck
Previous modNext mod

The MAZ 5440E9 truck is presented in the form of several configuration options, including two cabs, the same number of chassis types, and there is a choice of the most suitable bumper for your taste....