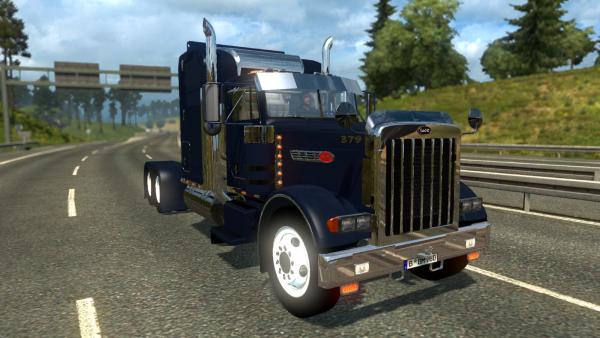 The American Peterbilt 379 EXHD tractor is a typical representative of US truck manufacturers. Released in 1999, the car is simply replete with a huge number of chrome parts, which makes it easily recognizable among similar cars. On the virtual roads of the ETS 2 simulator, the car at the level will look with mirrored transported tanks of the author’s addition to the tank pack. Excellent driving performance, driver safety and ease of operation allowed the car to occupy a worthy competitive niche among such trucks.

The mod of the Peterbilt 379 EXHD truck for Euro Truck Simulator 2 has a photographic resemblance to its real original, unique physics of behavior and a palette of sound effects enhance the player's presence effect. When you visit a car repair shop, a trucker has the opportunity to paint the cab in any color, and upon purchase, a complete set of fifteen engines and three gearboxes is available to him. The developers perfectly recreated the interior of the driver's cabin with a compartment for rest. The new truck was registered as autonomous by the authors, therefore, in addition to participating in orders of transport companies, it will also be found on the roads.

Dear user of the site, carrying out the transportation of goods on the virtual roads of Europe, for a variety of gameplay, do not forget to download and install new maps for any version of the simulator ETS 2!
truck tractor Peterbilt
Previous modNext mod