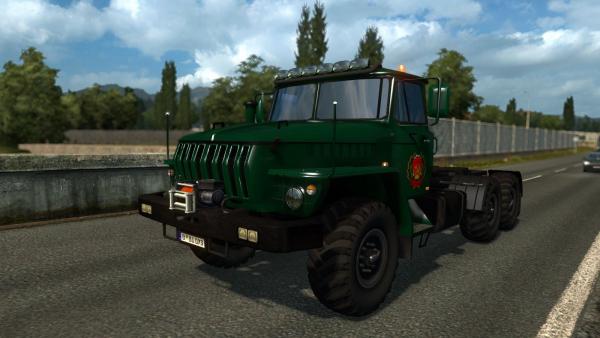 With the advent of author's Russian locations in the simulator, the demand for Russian cars increased, through the work of many developers in ETS 2 trucks and cars of Russian, Belorussian, Ukrainian production, as well as trucks inherited from the USSR, began to appear. One of them is the Ural-43202, which has a rich history. The first copy of the car was born in 1977 thanks to the engineers of the Ural Automobile Plant, located in the city of Mias. Production continued until 1988, during which time a powerful tractor conquered many kilometers of roads and off-road.

The mod of the Soviet Ural-43202 truck was transferred to Euro Truck Simulator 2 with all its attributes inherent in it being preserved. When buying a virtual trucker, an ordinary and off-road all-wheel drive version of the chassis with the corresponding original wheels is available, which fits perfectly into the Severe Russia Baikal map, three types of cabs, several types of engines and gearboxes. In a set of tuning, the authors tried to recreate the required set of characteristic elements and spare parts inherent in this particular truck. The interior of the driver’s cabin was a success, the genuine instrument panel with full functionality and the ability to install a GPS navigator, DVR, walkie-talkie and other devices will not leave indifferent the most severe and picky drivers. In addition, the model has its own physics of behavior and a characteristic set of sound accompaniment.

For lovers of a unique look, the authors have prepared interesting skins that can be download here.