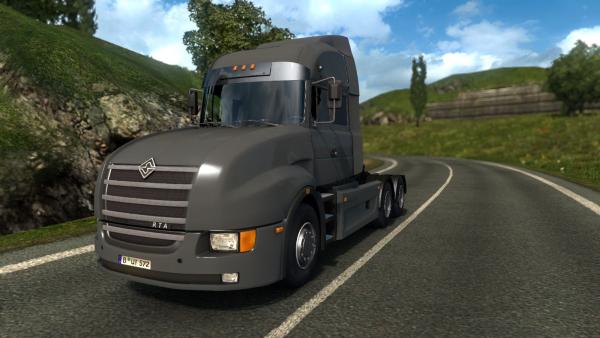 Every Russian citizen probably knows about the existence of Ural trucks, famous for their powerful design, unpretentiousness in operation and high traffic. All of these qualities became the main factor in the use of these vehicles for defense purposes along with KamAZ-5460, 6460, 65117 and 65201 trucks. But time does not stand still and the engineers decided to release a radically different model for civilian needs, so in mid-2008 at an automobile plant in the Chelyabinsk region, a completely new Ural 6464 tractor with an engine compartment was put into series. The new technical handsome man is able to transport goods weighing up to 62 tons with an engine power of 400 horsepower.

The Ural 6464 truck mod for Euro Truck Simulator 2 provides the trucker with a choice of five engines of various power and three gearboxes. A meager assortment of tuning parts will be compensated by the well-made side skirts that greatly decorate the exterior of the truck and organically fit into the fast streamlined cabin design. The new truck in the ETS 2 has a set of original wheels and a set of its own characteristic sound effects. The virtual driver will appreciate the high-quality interior and the dashboard console that completely repeat the original.

RETURN
Tested on ETS2 versions: 1.16 - 1.40
For sale in salons: Renault or DAF or Dealers of brands from modifications (depending on the version of the game)
Author(s) mod: Jawa, Stas556, Mishanka, Artem Abbasov, A.M.Tomas