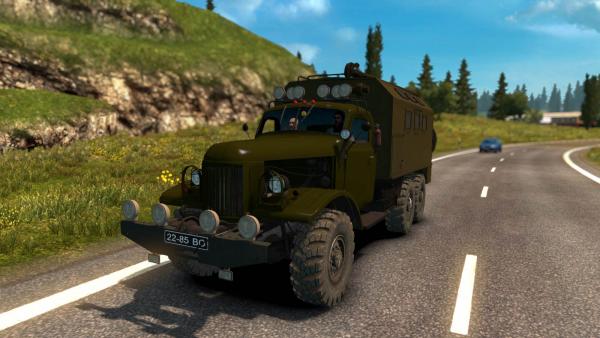 The legend of the Soviet automobile industry, the famous truck ZIL-157 began to be mass-produced at the Likhachev plant in 1958. At first, the production of the car was established exclusively for the needs of the Soviet army, and only after some time began the production of civilian modifications for the national economy. When designing the car, the designers took the ZIS-151, which was also produced in China under the name FAW CA-10, an off-road chassis with a 6x6 wheel formula, an engine with 110 horsepower and a five-speed gearbox that allowed transporting goods in off-road conditions .

The ZIL-157 truck mod for Euro Truck Simulator 2 is made using a high-quality three-dimensional model, there are two types of truck tractor chassis and a BDF frame. Under the hood, you can install any of the five engines presented from 360 to 680 horsepower, and eleven gearboxes at 6, 8, 10 and 12 speeds will help you easily overcome any route on the map of Severe Russia. In any garage of the ETS 2 simulator, the player has the opportunity to tune his steel friend to his taste, from a huge set of original spare parts and lighting fixtures. And of course, the authors did not forget to recreate the animated classic Spartan style of the interior of the cabin of the Soviet all-terrain vehicle of the middle of the last century.

Dear user of the site, traveling on the roads on the domestic truck, to feel like a real Russian trucker, we recommend you to download and install the mod Russian radio stations for any version of ETS 2 simulator!
ZIL truck tractor
Previous modNext mod

The legendary representative of the Soviet automobile industry, the MAZ-6422M truck on a tractor chassis was created by the authors specifically for the simulator. The developers of the mod embodied...