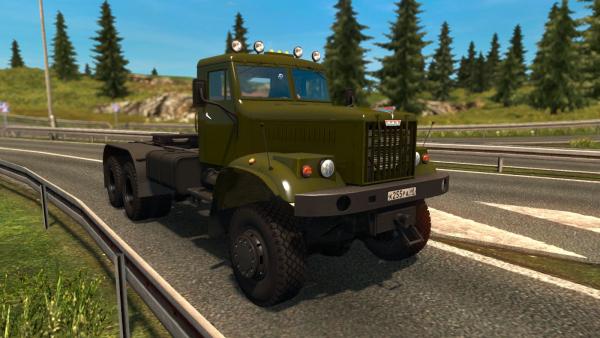 Since 1967, the road open spaces and the roads of the Soviet Union began to plow a serial heavy truck KrAZ-255B. The all-terrain vehicle has a chassis with a 6x6 wheel arrangement, was produced at the Kremenchug Automobile Plant until 1993, more than 160 thousand copies of trucks rolled off the assembly line for the entire time of production. Although the truck has not been manufactured for a long time, it can often be found in remote corners of Russia and Ukraine, transporting timber, construction equipment and other heavy oversized cargo in bad roads or in their complete absence, as in the author's additional location: a large-scale map of Stern Russia Baikal, where it will fit into the game world.

The mod of the heavy KrAZ-255 off-road truck for Euro Truck Simulator 2 perfectly conveys the atmosphere of the Soviet automobile industry, the authors of the modification implemented everything possible, from the driver’s cabin, made in the Spartan style, to the characteristic factory nameplates. I would like to separately note the unique tuning kit included in the kit, it is original with its configuration, that is, it contains all those elements than ordinary truckers and real drivers decorated the exterior and interior of the cab. And of course, the developers of the new automotive add-on for the ETS 2 simulator did not forget to prescribe their own physics of behavior and an individual set of sound accompaniment.