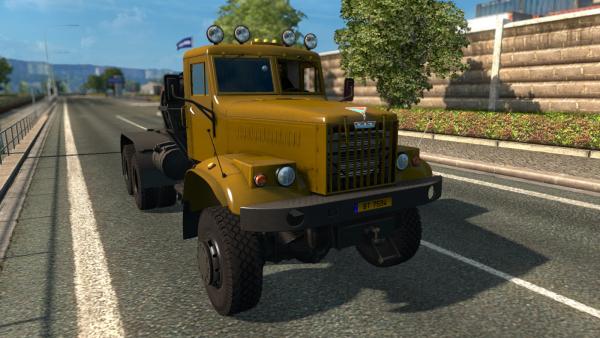 Soviet KrAZ trucks have a long and rich history. For several decades, automobiles have been working regularly in the open spaces of the far north, tundra and in conditions of Siberian impassability, which in our case will fit perfectly into the map of Severe Russia Baikal. The machine is used as a tractor for transportation of equipment, woods, as well as on-board modifications, like a refrigerator and many other purposes.

The new truck mode adds to the Euro Truck Simulator 2 two KrAZ-255 and KrAZ-260 cars, registered in a single slot, that is, a virtual trucker will be able to choose the desired model and equipment when buying a car in a car dealership. Of the technical component, two types of wheels, several engines and four gearboxes are available to the driver. Each of the cabins has its own original interior with carefully recreated elements, prescribed animation and support for the official addition of accessories. Appearance is improved with a small set of specific items for tuning. The virtual roads of the ETS 2 simulator will significantly change with the appearance of the good old Soviet truck with a tank, an onboard body, a refrigerator, a shift box or other additions that can be mounted in a car repair shop.

The world famous Italian manufacturer of trucks in 1992 began production of EuroTech cars, and in 1993 EuroStar. Over ten years of production, more than a thousand different modifications of the car...