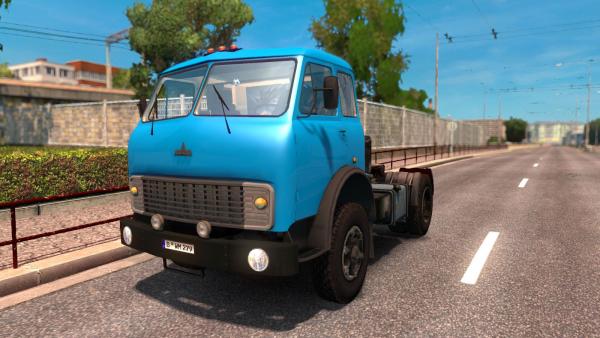 The legendary Soviet truck tractors MAZ-504 and MAZ-515, the production of which has been established since the sixties of the last century, and lasted about twenty years. Trucks were in demand in all sectors of the national economy, transported all kinds of goods of different weights, starting from building materials, and ended with refrigerated trucks with meat for long and short distances. Thanks to the authors of the mod, we now have the opportunity to tackle the Southern region, and the like, on the famous rare MAZ along the usual European routes, off-road Russian maps.

When buying a truck, the virtual driver will be asked to choose any of the two models presented. The MAZ tractor mod for Euro Truck Simulator 2 in its assortment has four driver's cabs, two original interior interiors with functioning instruments on the panel. Characteristic wheels give the truck an individual look. In technical terms, the variety is also not small, truckers of the ETS 2 simulator will be able to choose a chassis with a suitable wheel formula, engine and gearbox. And of course, there is a small genuine tuning, which gives a unique look, and the ability to paint the cab in a suitable color.

In the latest versions of the mod, adapted for ETS2 1.32 - 1.38, new realistic sounds, support for SiSL's accessories were added, the MAZ-9758 semi-trailer mod, available for purchase as a property, was added to the archive.