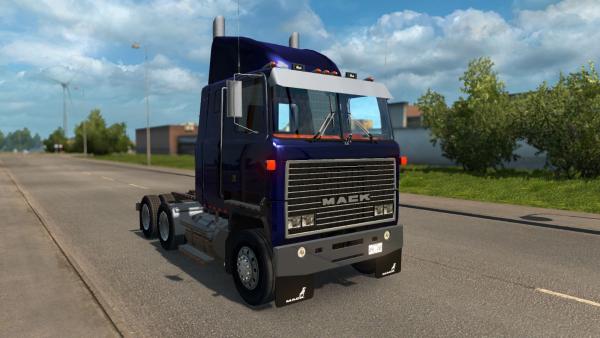 The Mack MH Ultra-Liner truck tractor series was launched in 1982 by the American automotive giant Mack Truck. For the entire time of auto production, more than 16,000 cars were produced, the last of which went off the assembly line in 1990. The trucks were equipped with two types of cabs, a regular and an elongated version with a driver's berth, depending on the purpose of the tractor, and a powerful engine of 500 horsepower.

The mod of the Mack MH Ultra-Liner truck tractor for Euro Truck Simulator 2 does not differ in a large selection of equipment, tuning elements and spare parts, but fans of the American Peterbilt and Kenworth tractors implemented in the ETS 2 simulator add-ons will quite like it, since the authors registered the possibility of painting the driver's cab in metallic colors. In addition to this, a virtual trucker will be amazed by its high-quality detailed interior design, the ability to change the front bumper, the choice of two engines of different power and a large number of chrome elements, which significantly distinguishes American trucks from their European counterparts. And of course, the Mack car has an original set of sounds and its own animation.

RETURN
Tested on ETS2 versions: 1.22 - 1.37
For sale in salons: Iveco or Mercedes-Benz (depending on the version of the game)
Author(s) mod: Elaman, Gazila, Fenix, CyrusTheVirus, Mahad110, Luis Esqueda, Kriechbaum

The Mack Super-Liner truck developed by the Australian subsidiary of Mack Trucks has focused on the domestic market. The virtual version is as close as possible to its real prototype, the authors...