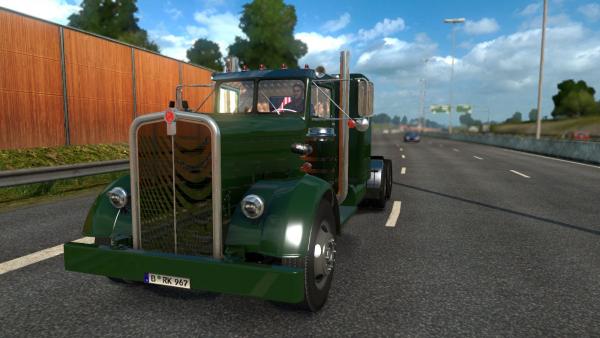 The famous American truck Kenworth 521 was developed in the late thirties of the last century on the instructions of the US leadership. Engineers at Kenworth Truck Corporation have invested in the model all the most advanced technologies of the time, in connection with which, the car became ultra-popular on the continent. He reached the peak of popularity in the late fifties, after several upgrades, which allowed the truck to reach speeds of up to 110 kilometers per hour.

The authors of the mod reproduced an almost complete copy of the Kenworth 521 tractor, in Euro Truck Simulator 2 it looks as realistic as possible thanks to the high-quality model and textures, and is proud to replenish the collection of retro cars along with the Scania LS 111 and LS 110. The virtual driver of the ETS 2 simulator will be happy to find An assortment of twelve engines with capacities ranging from 218 to 520 horsepower and five gearboxes. Exactly recreated cabin interior with animated appliances plunged into the technical ecstasy of the most picky trucker. The player is given the opportunity to paint the cab and rims in a suitable color, and the original set of sounds and individual physics of behavior will allow you to spend unforgettable hours playing the game.

The famous Kenworth T908 heavy truck was developed by the American automobile corporation, but its production was established at the Australian branch of the auto giant. In addition, the authors...