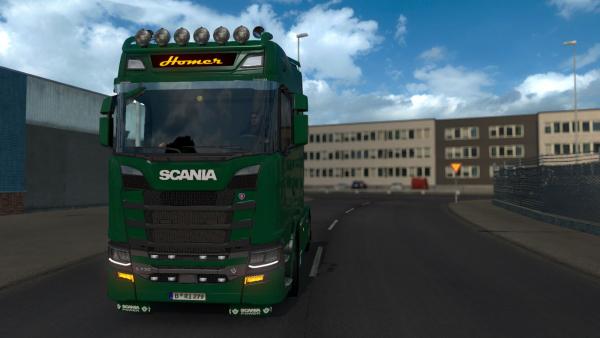 Scania S730, the latest massive trunk tractor from Scania AB's Swedish engineers. The designers of the truck embodied in the car all the latest technical innovations and requirements for the convenience of drivers. As a result, the car received a spacious rational cab with a flat floor, and a fundamentally new sixteen-liter engine with a capacity of 730 horsepower that meets the current environmental requirements of Euro-6.

The Scania S730 mod adds to Euro Truck Simulator 2 not just a new truck, but a whole series of Scania tractors. Machines of such power will be able to transport any cargo, including large oversized cargo from the mod pack. The virtual trucker of the ETS 2 simulator has a choice of two powerful engines, six types of chassis with a wheel formula: 6x4, 6x2 and 4x2. The range of accessories and a carefully designed dashboard will leave a pleasant impression even for the most demanding player, in addition, there is the possibility of selecting a cabin, presented in three variants of a color palette, and a steering wheel.