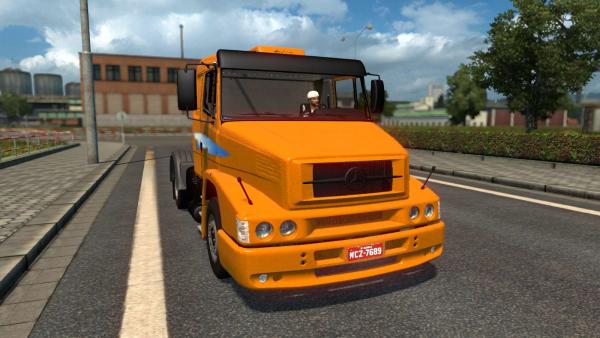 The Mercedes-Benz 1634 truck with an engine compartment was developed by German designers specifically for the countries of South America. Truck production was launched at Mercedes subsidiaries located in Brazil and Argentina. The release was carried out from 2000 to 2016, several thousand copies were produced, which are often found not only on Brazilian roads, but also in almost all Latin American countries.

The mod of the truck Mercedes-Benz 1634 for Euro Truck Simulator 2 is created using the original three-dimensional model. The truck has one cab on a chassis with a 4x2 wheel arrangement, under the hood is a proprietary engine with a capacity of 435 horsepower. Unfortunately, the tractor has almost no spare parts for external tuning, however, a reliable interior with prescribed animation will fully cover this author’s flaw in the modification to the ETS 2 simulator.

The German tourist bus Mercedes-Benz Travego X 2020 in the game world of the ETS 2 simulator is practically indistinguishable from the original, both externally and in the cabin. The vehicle is built...

The new mod adds to the game world of the ETS 2 simulator a two-axle truck Mercedes-Benz L 1111 and a LS 1111 truck tractor, made in compliance with all similarities with the original. On the...