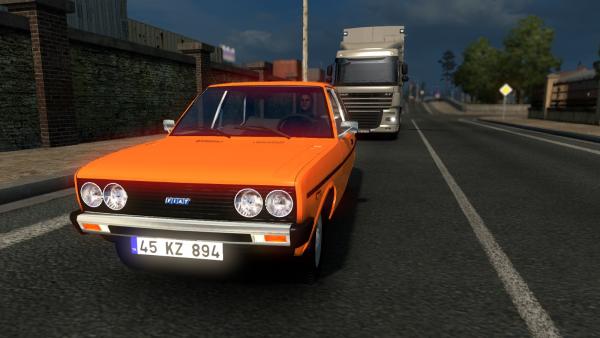 In 1974, the Fiat automobile company launched the production of the Fiat 131 model, which was a breakthrough model for those times. Design solutions were not so new, but they differed significantly from the classic representative of the 124 model. The car served as a kind of muse for Soviet auto designers, who took the visual features of a small car for the passenger car VAZ 2106, which was released in 1976. Both cars have many similarities in body finishes, which speaks to the close cooperation of automakers in both countries.

The Fiat 131 passenger car mod for Euro Truck Simulator 2 in the configuration kit contains several technical versions. Three versions of the engine with a volume of 1300, 1600 and 2000 cubic centimeters are available to the virtual driver, and for each of them the authors have written their own characteristic set of sounds, which is very rare for the ETS 2 simulator. The gearbox is only one, at five speeds. If desired, the player can put a special beacon on the roof indicating a taxi. From the variety of chassis, you can choose the original or understated version with branded alloy chrome wheels and genuine tires. The interior of the cabin is carefully designed, the developers recreated a functioning dashboard with an animation of buttons and light indicators. And for fans of modern trends, it became possible to install a car radio and GPS navigator for a fun and easy trip.

Dear site user, for cargo transportation by passenger car, do not forget to download and install the mod Passenger trailer for all ETS 2 simulator versions!
cars Fiat
Previous modNext mod

The Fiat Tipo car is implemented in the game as a universal modification, when you visit a car dealership, a player in one slot can find a car in two body types at once: a hatchback and a sedan, and...