where do i find the compatible busses?... 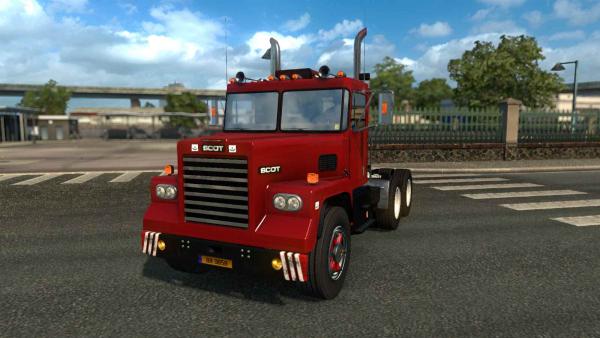 Unusual small truck Scot A2 moved to ETS 2 directly from the simulator of the American trucker ATS. In appearance, the features that are primordial for North American heavy vehicles are easily determined in the car, in the form of an engine compartment layout of the engine. The truck was produced by the Canadian company Scot Trucks from 1972 to 1980 in modifications of special vehicles of a snow blower, truck crane and other types; more than a thousand trucks left the assembly line for all years.

The mod of the Scot A2 tractor for Euro Truck Simulator 2 has two types of chassis, nine engines and as many as eighteen gearboxes. The authors have implemented a large number of items of external tuning. Virtual truckers will be pleasantly struck by the original high-quality interior of the cabin, its own set of sounds and the characteristic physics of behavior. In addition, the truck is present in orders of transport agencies.

Dear user of the site, carrying out the transportation of goods on the virtual roads of Europe, for a variety of gameplay, do not forget to download and install new maps for any version of the simulator ETS 2!
Scot truck tractor
Previous modNext mod

The BMC Pro 821 truck has a rather unusual cab design, built on a 4x2 chassis and featuring a 293 horsepower engine, the truck will fit perfectly into the gameplay. Two types of color finishes for...