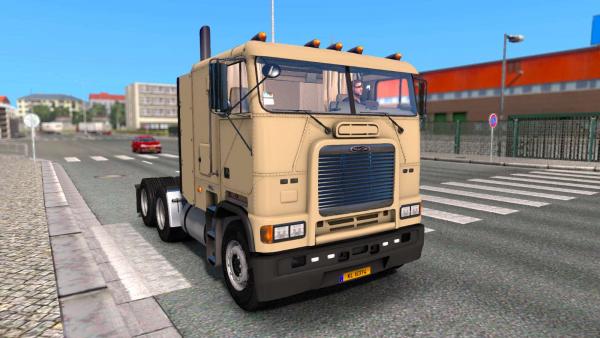 The American truck Freightliner FLB is known to a wide range of players in the ETS 2 simulator. Although it is quite difficult to meet him on domestic roads, it is quite easily recognizable thanks to Hollywood films. Thanks to its peculiar charisma, the car was very fond of the directors of the Dream Factory and became a kind of movie star. The engine of the truck is located under the cab, which distinguishes it from the classic American trucks Peterbilt and Kenworth, massively operated in the United States.

The Freightliner FLB truck mod for Euro Truck Simulator 2 has a very solid look, the authors implemented registration in orders of transport companies. The car has an original solid interior with an authentic interior and dashboard. The developers have added several characteristic skins, individual tuning, and a set of their own sounds. In addition, the virtual trucker has the option of painting the body in any selected color.

In addition, you can separately install a pack of 10 skins that add dirt and rust to the cab, as well as a dirty interior with broken appliances. It works on all versions of the simulator and mod, when connecting, you must comply with the priority! You can download the dirty skins mod from this link.