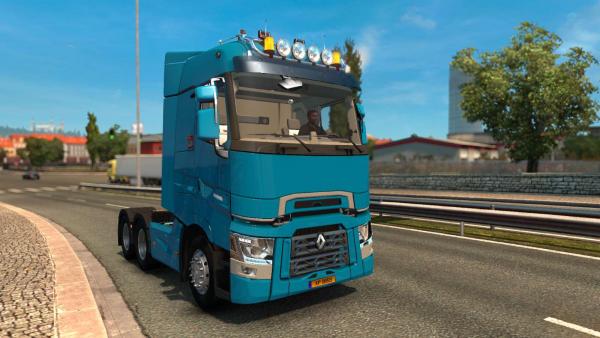 One of the most advanced developments of the French company Renault Trucks, Renault Trucks T truck, was presented at the prestigious automobile exhibition in the second half of June 2013. The exterior design of the car cabin resembles the Renault Range T, however, its technical filling is an order of magnitude higher. The truck is equipped with a robotic gearbox and a powerful engine of Euro 6 environmental standard. The cabin interior is characterized by increased comfort and safety for the driver.

The mod of the truck Renault Trucks T for Euro Truck Simulator 2 externally completely repeats its original brother, high-resolution textures and a high-quality three-dimensional model of the passenger compartment accurately conveys the atmosphere of being in the cab of a real truck. From the spare parts kit, the virtual trucker of the ETS 2 simulator is available with three engines with power from 440 to 520 horsepower, a couple of gearboxes and branded wheels with tires. For external tuning, there are many original elements, several skins, as well as the color of the cab in any color, including metallic.