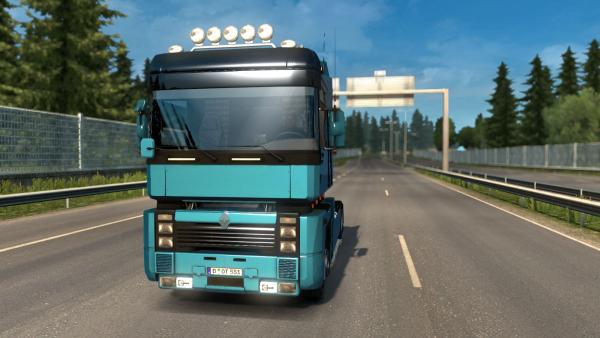 The Renault Magnum Integral 390 tractor unit was launched by the French automobile concern Renault Trucks in 1990. Cars were produced in two versions, truck tractors and flatbed trucks. Over the entire period of production, the car survived four generations and in 2014 it was discontinued, where the new, more advanced Renault T model took over. But despite this, the transportation of a large number of different cargoes is still assigned to this model.

The mod of the heavy truck Renault Magnum Integral 390 for Euro Truck Simulator 2 almost completely repeats its real existing model. When buying a virtual driver, two chassis and cab options and one engine with a capacity of 390 horsepower will be available. When choosing the appearance of Renault, it is possible to paint the bumper or grille in the color of the cabin, as well as a small set of tuning with stickers, logos and other useful trifles. And of course, the trucker is always pleased to see a decent interior in the ETS 2 simulator, in our case we have a completely recreated original with a characteristic instrument panel and the possibility of placing special accessories on the dashboard and windshield.

The Renault Major truck will bring a fresh stream of nostalgia for the 80 - 90 years of the past century to the game process, because just at that time on the expanses of highways you could meet such...