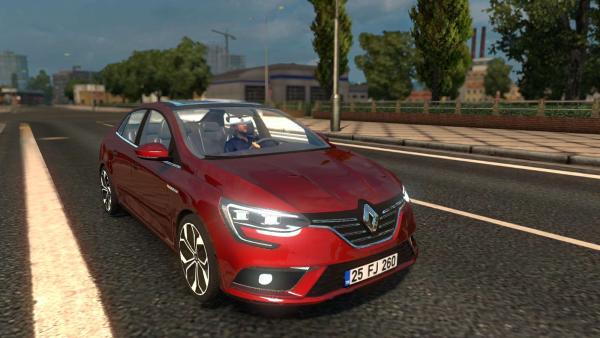 In mid-2015, the designers of the Renault automobile concern introduced the new modern Renault Megane IV passenger car built on the CMF-CD platform, the mass production of which was established a year later. The car received a slightly lower ground clearance than Megane of the second series, and is available in three types of bodies: sedan, hatchback and station wagon. The popularity of this model breaks all records among motorists.

The mod of the Renault Megane IV passenger car sedan-type for Euro Truck Simulator 2 was created using a high-quality three-dimensional model and high-resolution textures. The developers of the modification devoted a lot of time and effort to working out the appearance of the car and the interior. As a result of the painstaking work of the authors, the car has an original interior with a fully functional dashboard and GPS navigator and a set of characteristic wheels with tires. A flawless car exterior will significantly improve the virtual world of the ETS 2 simulator and give the gameplay maximum novelty and uniqueness.