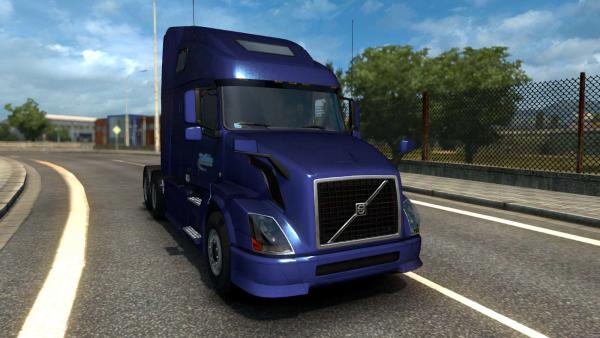 In the mid-nineties of the last century, the designers of the Swedish automobile concern Volvo Group developed a series of tractors under the VNL index, which also includes the Volvo VNL 660 truck. The trucks were intended for the US market, but their popularity was so great that many lots of cars went far outside the North American continent.

Mod trucks Volvo VNL 630 and 670 for Euro Truck Simulator 2 are of high quality implementation, the authors added two cabs from 630 models and one from 670, built on a chassis with a 6x4 wheel arrangement. When buying a truck at a Volvo car dealership, or upgrading in any of the garages of the ETS 2 simulator, a wide range of engines with power from 380 to 650 horsepower with a characteristic set of sound effects, and a dozen gearboxes at 6, 10, 13 and 18 stages are available to the player.

For tuning, the modification developers have prepared more than fifty different accessories, from mirrors and headlights to spoilers and exhaust pipes. Particularly noteworthy is a well-designed original interior with points of attachment of various attributes.

Dear user of the site, carrying out the transportation of goods on the virtual roads of Europe, for a variety of gameplay, do not forget to download and install new maps for any version of the simulator ETS 2!
Volvo tractor truck
Previous modNext mod