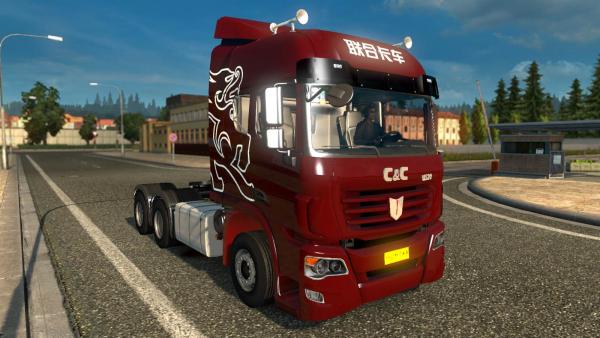 Developers of modifications to the ETS 2 simulator quite often please fans of the game of implementations of representatives of the Chinese automobile industry, including the FAW J6P, Howo T7H and other trucks from the Middle Kingdom. This time, the player’s court presented the mod of the C&C U520 main truck for Euro Truck Simulator 2, built on a chassis with a 6x4 wheel formula.

The truck has a modern design and is equipped with an engine of 680 horsepower, the virtual trucker has the opportunity to choose one of two sixteen speed gearboxes and install additional lighting devices. The car has a sophisticated original interior and a set of its own sound effects.

Dear user of the site, carrying out the transportation of goods on the virtual roads of Europe, for a variety of gameplay, do not forget to download and install new maps for any version of the simulator ETS 2!
truck tractor
Previous modNext mod

The Smarty wheel mod adds more than 20 sets of tires to Euro Truck Simulator 2, from well-known brands such as Continental, Goodyear and Michelin with their own characteristics that affect the...

New mod realism SiSL's City Lighting is designed to improve the perception of the night cities of the game world simulator ETS 2. The new lighting replaces the emitted light of the masts of urban...

A high-quality set of new natural sounds Sound Fixes Pack was created to improve the gameplay as close as possible to its realism. The range includes the sound effects of switching levers, the...