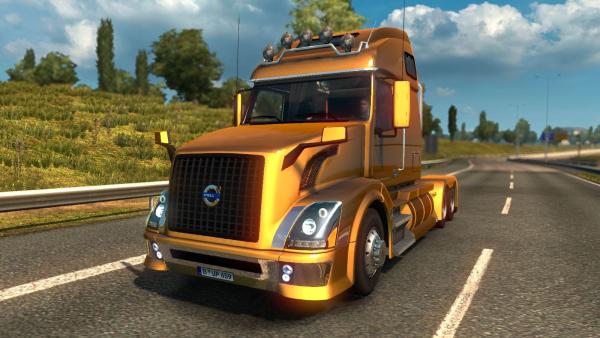 The Volvo VNL 670 bonnet tractor was developed by Volvo's US representative office for the domestic market in the United States and some North American countries. In appearance, the truck has obvious features of American heavy trucks, built on a chassis with a cab from European designers, and the entire internal technical filling went to the car from American manufacturers. The machine was perfectly operated for long-distance transportation of heavy and oversized cargo, but it was not widely used due to high competition.

The mod of the heavy truck Volvo VNL 670 for Euro Truck Simulator 2 has almost everything that its real prototype has. The chassis is presented in ten versions, under the hood, the trucker can place powerful engines, with its own soundtrack from 380 to 750 horsepower, equip one of the six gearboxes and install the original wheels. The color palette allows you to paint the cabin in any color, including metallic. As for the interior, there are already five options for our virtual truck, where you can take a break, sitting in the passenger seat or at a table in the driver's compartment. The new car will greatly decorate the ETS 2 simulator; in the tuning kit, the player will find just a huge amount of spare parts, including headlights, bumpers, side skirts, mirrors and much more. It is worth mentioning about the tinting of glasses, for it there are four colors of the film.

Swedish trucks Volvo VNL 660 were originally developed by engineers to conquer the US automobile market, as evidenced by the huge cab with a spacious driver's compartment, more reminiscent of true...