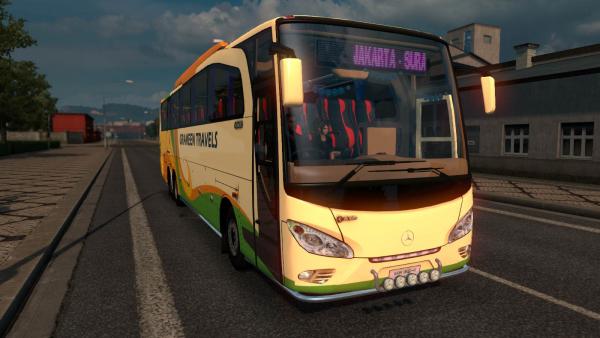 Hino RM2 family passenger buses were produced by the Japanese company Hino Motors specifically for the market in South Asia, including the Republic of Bangladesh.

The Hino RM2 bus mod for Euro Truck Simulator 2 includes two vehicle modifications on a two-axle chassis with 4x2 and 6x2 wheel formulas. Of the power units sold eleven engines and five gearboxes. When it was created, a highly detailed three-dimensional model and branded colorful skins were used, which give the maximum of realism to the virtual analogue.

The transport has an original animated interior with a right-hand drive, which adds convenience when moving around the streets of Tokyo. From external tuning, several options are available for mirrors, LED displays, window stickers and much more, as well as a player of the ETS 2 simulator, it is possible to turn on interior lighting. And of course, the authors did not forget to prescribe their own physics and add a set of characteristic soundtracks.

Dear user of the site, for passenger transportation by bus, do not forget to download and install Passenger mod for all ETS 2 simulator versions!
bus Hino
Previous modNext mod

A unique mod that implements a series of trucks from Hino Motors in Euro Truck Simulator 2. In addition to the trucks themselves, the addition contains original trailers. The player is given a wide...