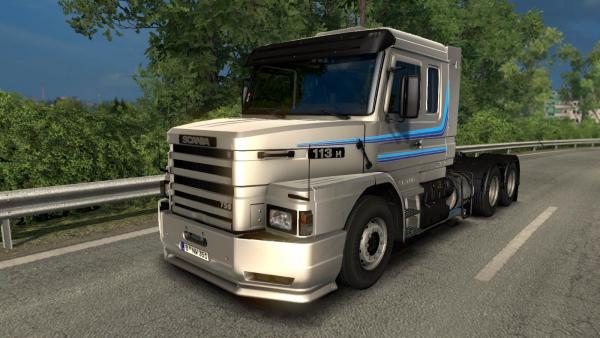 The classic Scania 113H truck truck range was produced by the Brazilian subsidiary of Scania AB, until the year 2000.

The Scania 113H truck mod for Euro Truck Simulator 2 is more functional than its predecessor: the Scania 113 series. The basis of the modification was a three-dimensional truck model with high detail. The authors implemented five types of chassis with wheel formulas: 4x2, 6x2 and 6x4. In addition, five engines with a capacity of 320, 360, 440, 620 and 750 horsepower with their own sets of sounds, as well as thirteen gearboxes at 6, 7, 8, 10 and 12 speeds, were added to the tractor.

Of particular note is the original detailed interior of the cabin with fully prescribed advanced animation. Well, when you visit the auto repair shop, the virtual trucker of the ETS 2 simulator prepared a set for external tuning, which included antennas, mud flaps, body kits and much more.