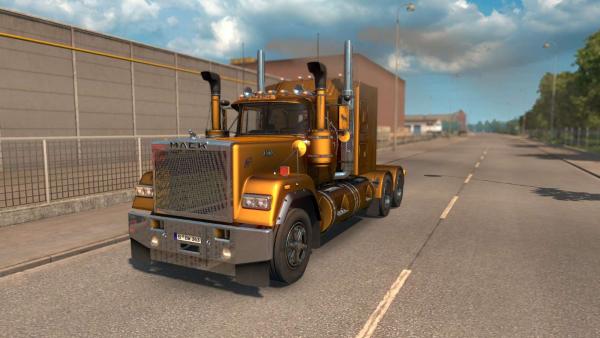 The main truck Mack Super-Liner was designed by a subsidiary of Mack Trucks, located in Australia for the transportation of heavy cargo as part of a road train in the mid-seventies of the last century. Production was mainly focused on the domestic market. The truck was successfully operated in different conditions, which earned respect among truckers.

The mod of the powerful Mack Super-Liner main truck for Euro Truck Simulator 2 was created by the authors using a high-quality model and high-resolution textures. The developers tried to accurately recreate the characteristic interior of the cabin, they prescribed animation not only the arrows of the dashboard, buttons and levers, but even the rotation of the ignition key when starting the engine. The set of additional parts and tuning includes body kits, mud flaps and many other items of appearance. Virtual truckers simulator ETS 2 will delight realized exhaust smoke from the exhaust pipe. When buying at a car dealership, the driver can choose the color of the interior, engines of various powers, out of nine available, and the same choose the most suitable gearbox out of six available in addition. And of course, the truck has a set of characteristic sounds and physics of behavior.