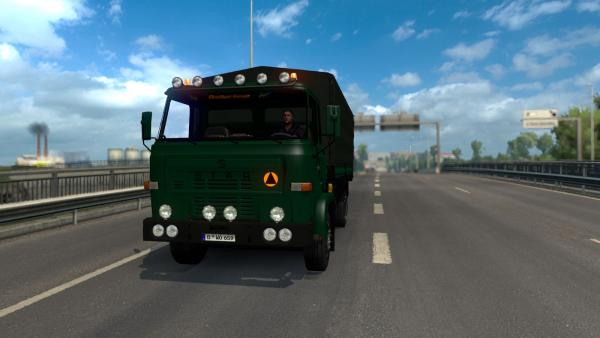 The small truck FSC Star 200 was produced by a Polish automobile company with a star name. Basically, the issue was adjusted for domestic needs, but also delivered in small batches abroad. Especially popular were military modifications, which were purchased by countries with a low budget. The technical characteristics are very modest, the lorry had a maximum speed of up to 90 kilometers per hour, and the carrying capacity was up to 6 tons, but the low price allowed it to compete with more well-known manufacturers.

The mod of the Polish FSC Star 200 truck for Euro Truck Simulator 2 is performed quite qualitatively, when buying in a car dealership, a trucker will be presented with several types of civilian cars on a two-axle chassis and an army version of the car with three axles, a tent-covered body and an enlarged cab. Due to its small size and well-defined physics of real behavior, the truck will easily overcome any roads, including complex mountain serpentines, as in the additional location of the ETS 2 simulator of Peru map mode. You can note the well-designed interior of the cabin, which repeats the original as much as possible, where additional objects can be placed on the dashboard.

Dear user of the site, carrying out the transportation of goods on the virtual roads of Europe, for a variety of gameplay, do not forget to download and install new maps for any version of the simulator ETS 2!
FSC truck
Previous modNext mod

What inspired the authors to create such a global mod remains a mystery. But it can be assumed that he was bored with the monotonous fictional logos visible from the truck window. The mod really...