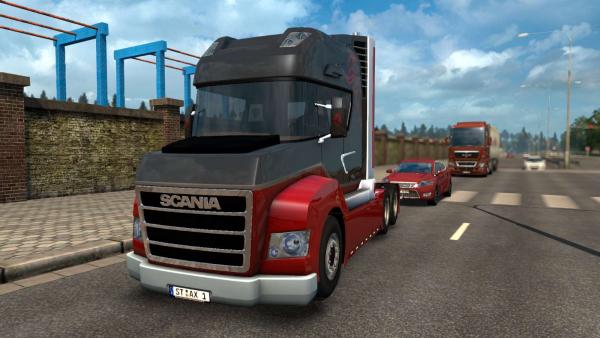 The exhibition model STAX (Scania Truck Advanced Xterior) truck concept, which was presented by the Swedish company Scania at the 2002 Hanover International Auto Show. The car did not go into mass production, however, the peculiar design of the cab, with the engine compartment under the hood more characteristic of American trucks, was appreciated by the members of the exhibition jury.

The Scania STAX truck mod for Euro Truck Simulator 2 is built on a truck tractor frame with a 6x4 chassis formula. The authors recreated the original cabin, but the interior of the cabin is rather modest as a study, and the truck got the dashboard from the standard Scania R. In any of the garages of the ETS 2 simulator, a range of dozens of engines with power from 380 to 730 horsepower is available to the virtual trucker, own twelve-speed gearbox and original wheels.