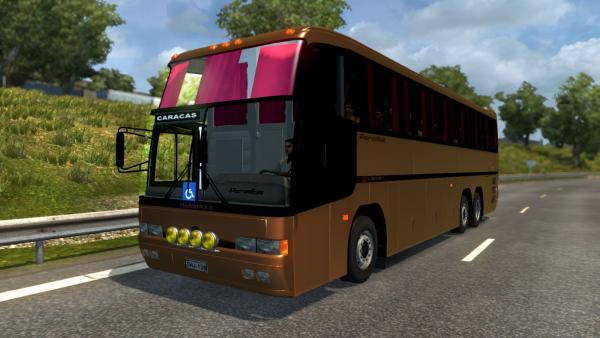 The popular Marcopolo GV 1150 regular bus from the Brazilian passenger transport concern is built on a chassis with a 6x2 wheel arrangement. The release of this series was launched in 1992 and continued until 2000.

The mod of the Marcopolo GV 1150 regular bus for Euro Truck Simulator 2 with photographic accuracy repeats its real existing prototype. The authors recreated the original interior of the cabin with animation, added twelve engines with a capacity of 360 to 730 horsepower with their own set of sounds and three gearboxes. In terms of tuning, the player of the ETS 2 simulator has the ability to accommodate passengers, install additional lighting devices, tint glass, select plates indicating the cities of the upcoming flight, which will add realism to Brazilian routes, as well as registration license plates of most Latin American countries. Well, sixteen bright corporate skins complement this technical masterpiece.