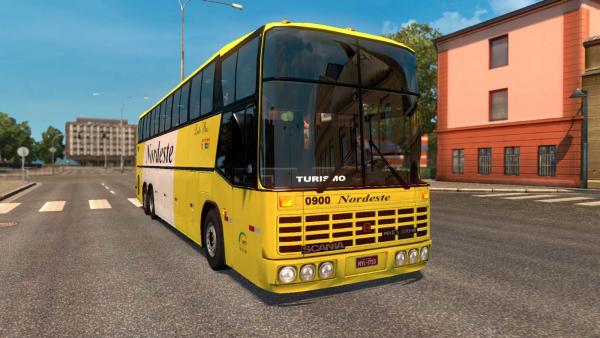 The comfortable bus Nielson Diplomata 380, manufactured by Nielson, which after the reorganization changed its name to Busscar Onibus, is based on the Scania K112. The passenger vehicle is almost the same as the modern Scania Touring K360 in terms of amenities, it was designed on a chassis with a 6x2 wheel arrangement, the superior cabin is designed to carry 44 passengers, and for the convenience of the trip, one TV was installed over each row of seats.

The bus mod Nielson Diplomata 380 for Euro Truck Simulator 2 has an original interior with prescribed animation, the authors managed to implement the functionality of the devices, switching levers and the function of the wipers, as well as the ability to press: O, to turn on and off the lighting. The player has access to the only classic chassis with a 6x2 wheel arrangement, four engines with power from 380 to 730 horsepower, three gearboxes, two of which have twelve speeds and one six stages.

When buying at a car dealership or when upgrading in any workshop of the ETS 2 simulator, the player has the option of tuning the vehicle. Among the accessories, you can choose the appropriate plates, curtains, the density of the tinted glass, as well as select a video for broadcast on internal television. And finally, in addition to the usual color in any color, the bus can be decorated with one of thirty branded skins.

Dear user of the site, for passenger transportation by bus, do not forget to download and install Passenger mod for all ETS 2 simulator versions!
Nielson Scania bus
Previous modNext mod

The modern comfortable Scania Touring K410 bus, designed for 44 seats and working on long-distance routes, has two steering wheel options, left and right, which increases convenience when driving in...