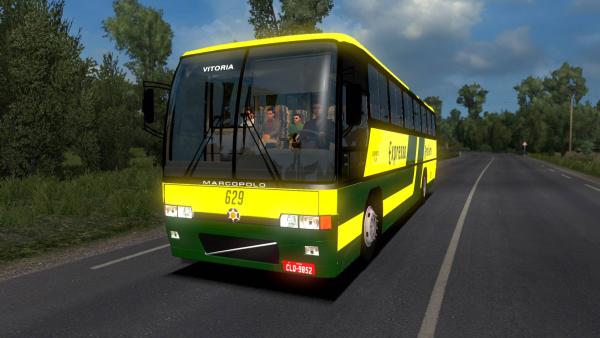 The Marcopolo Viaggio GV 1000 commuter bus, designed on a biaxial chassis, has been mass produced since 1992 by the Brazilian company Marcopolo, specializing in the production of passenger vehicles. The vehicle is designed on the basis of the popular Volvo B10M, and almost completely repeats its appearance.

Marcopolo Viaggio GV 1000 commuter bus mod for Euro Truck Simulator 2 is built using a realistic three-dimensional model. The authors realized the original interior with well-written animation, a pair of engines with 310 horsepower and a six-speed gearbox. Special attention should be given to the possibility, as in Torino GVI, accommodation in the cabin of passengers, which will be a pleasant surprise for fans of the simulator ETS 2. In addition, added its own set of sound effects, authentic colorful skins, the ability to tinted Windows, installation of lighting fixtures and some other useful accessories.

The 1999 Marcopolo Torino GVI bus fits perfectly into the standard gaming world, bringing a lot of novelty to the simulator roads. The authors realized the possibility of boarding passengers in the...