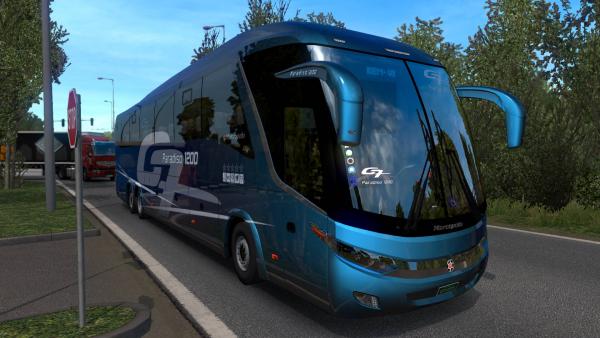 Brazilian Marcopolo Paradiso G7 1200 regular buses are produced by Marcopolo S.A. since 2009. Production continues today on the Volvo chassis. Modifications of passenger vehicles vary in the number of axles, for example, the players of the ETS 2 simulator were already lucky enough to get acquainted with a bus with a 4x2 wheel formula, and now, now we have a 6x2 transport option.

The mod of the Marcopolo G7 1200 regular bus for Euro Truck Simulator 2 has a realistic appearance, thanks to a high-quality three-dimensional model. The authors implemented a couple of interior options with full animation, four types of suspensions, the same number of gearboxes at 6 and 12 speeds and three engines with 380, 420 and 430 horsepower with a set of their own soundtrack. For external tuning, a set of spare parts and 42 original bright skins are prepared.

The Brazilian Marcopolo Paradiso G6 1200 bus in Euro Truck Simulator 2 has a realistic appearance, thanks to a three-dimensional model of the body and interior. The passenger transport mode is...