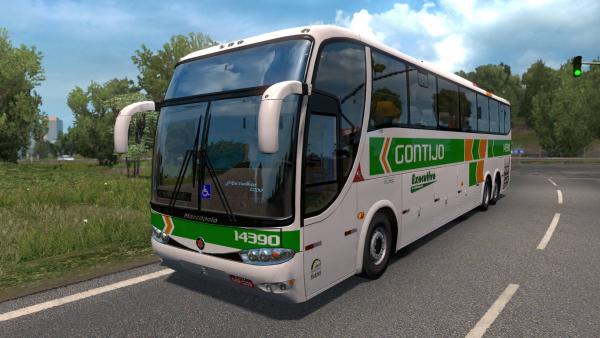 Marcopolo Paradiso G6 line of buses from the Brazilian company Marcopolo S.A. produced since 2000. Production continued for more than 10 years, and in mid-2011, on the assembly line, it was replaced by a new, much technically advanced family of Marcopolo Paradiso G7 buses, characterized by increased comfort and safety, both for passengers and for the driver.

The Marcopolo Paradiso G6 1200 bus mod for Euro Truck Simulator 2 was created using a realistic three-dimensional model of the body and interior. The authors implemented an original salon with full animation, on the technical side a couple of chassis types with a 6x2 wheel arrangement, seven engines with power from 360 to 500 horsepower with their own set of sounds for each, and four gearboxes at 7, 8 and 12 speeds were added. For the player of the ETS 2 simulator, the possibility of tuning has been prepared, which includes placing passengers in the cabin, choosing a tinted glass, installing an air conditioner, replacing headlights and mirrors. And for external design, there are 37 colorful skins.