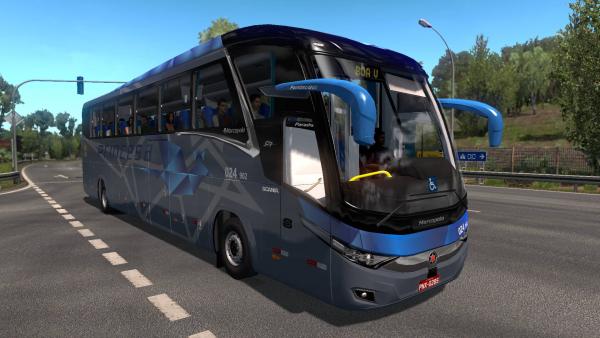 The Marcopolo G7 1200 bus is already known to many players of the ETS 2 simulator, as it has already been ported to the game of earlier versions. And here, a new, better and interesting version of this vehicle from the author B4D.

Mod bus Marcopolo G7 1200 4x2 for Euro Truck Simulator 2 previously distributed only as a private, but after a while the developer of the modification decided to make it public. The passenger vehicle has a quality body model with 26 skins and an alternative to opening the rear door. Carefully recreated interior with prescribed full animation devices, the ability to turn on the interior lighting, broadcast video on the monitors and the choice of camera view from the passenger seat will be a pleasant surprise even for the most picky players.

When buying a vehicle, you can choose a suspension with high or low clearance, on the technical part of the mod is equipped with a single engine with a capacity of 360 horsepower with a set of its own sound effects, and a pair of gearboxes at 8 and 12 speeds. Special attention deserves a new, close to realistic physics, which provides excellent handling and behavior of the bus on the road.

And of course, I want to focus on tuning, for which a lot of accessories and spare parts are prepared: 2 versions of the windshield, solid and divided, led displays with the designation of routes, varieties of tinted Windows, several colors of curtains on the Windows, placement of different numbers of passengers, open or closed front door, nameplates on the body and much more.