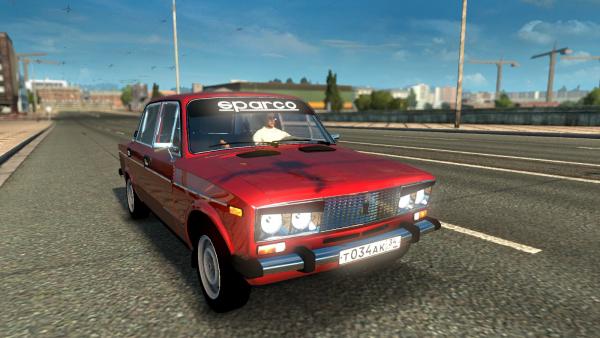 The legendary popular Soviet passenger car VAZ 2106, the production of which began in 1976 and lasted for 30 years, 4.3 million copies of passenger cars rolled off the assembly line for the entire time of production. For the Soviet citizen, the acquisition of the sixth model Lada was a cherished dream, and the happy owners of the six proudly drove through the streets of catching the envious glances of their compatriots.

The mod of the VAZ 2106 passenger car for Euro Truck Simulator 2 was performed very well; when creating the modification, the authors of the add-on used original drawings, which made it possible to implement the model as close as possible to a real existing original. When visiting a car dealership, when buying a car, the driver will be offered several configuration options, including three types of engines with a volume and power of 1300 and 63, 1500 and 73, 1600 and 76 horsepower, respectively; in addition to the usual suspension, you can choose an understated one, which will modernize the iron old man. Particular attention should be paid to the quality of the interior, it is so reliable that the gameplay blurs the line between reality and the virtual world. Well, it's time to pay attention to improving and changing the appearance of the car, the first and most important thing is the hitch, with which the player of the ETS 2 simulator will be able to carry out cargo transportation on a light trailer, then it’s possible to tint windows, install a spoiler and roof rack, replace bumpers and mirrors, and of course several types of wheels.

Dear site user, for cargo transportation by passenger car, do not forget to download and install the mod Passenger trailer for all ETS 2 simulator versions!
cars VAZ
Previous modNext mod

The car BMW E34 is known in Russia, mainly for the dashing nineties, when shaven-headed guys famously drove through the streets of the city, arranging gang fights. The virtual version of the car is...

Sporty Mitsubishi Lancer Evolution high-speed car, which differs from the serial version by a more powerful engine and the presence of the corresponding attributes. Upon purchase, original wheels are...