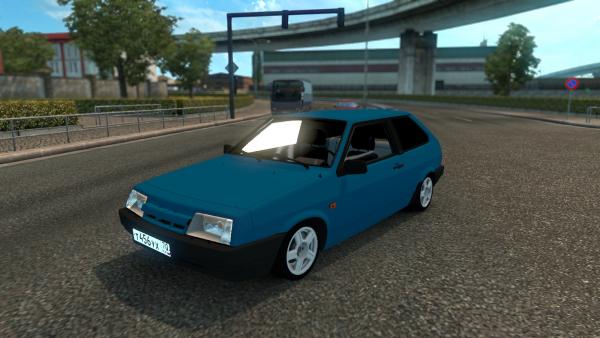 The dream of Soviet motorists of the second half of the eighties, a passenger car VAZ 2108, popularly nicknamed: chisel, thanks to its chopped body geometry. The car was developed, as they say, from scratch, the engineers of the Togliatti Automobile Plant for the first time managed to implement a front-wheel drive scheme, which radically distinguished the passenger car from classic models such as the VAZ 2106, and was a breakthrough in the domestic automobile industry.

The mod of the VAZ 2108 passenger car for Euro Truck Simulator 2 is made in very decent quality. The authors of the modification recreated the eight of the first years of release, having a low panel and a short wing. In the garage of the simulator, a truck with one engine option, a five-speed gearbox and two types of headlights, wheels and tires is available to the trucker. Unfortunately, the developers missed the implementation of items for external tuning, but this does not stop the eight from taking their rightful place on the ETS 2 virtual roads.

Dear site user, for cargo transportation by passenger car, do not forget to download and install the mod Passenger trailer for all ETS 2 simulator versions!
cars VAZ
Previous modNext mod

The virtual version of the Soviet passenger car VAZ-2108 - LADA Samara, produced for export, looks quite realistic. The developers of the mod managed to implement a detailed body model, their own...

The modable BMW M5 E34 passenger car is now available in ETS 2. The excellent appearance and sophisticated interior interior will not leave fans of the simulator indifferent. Indeed, for players...