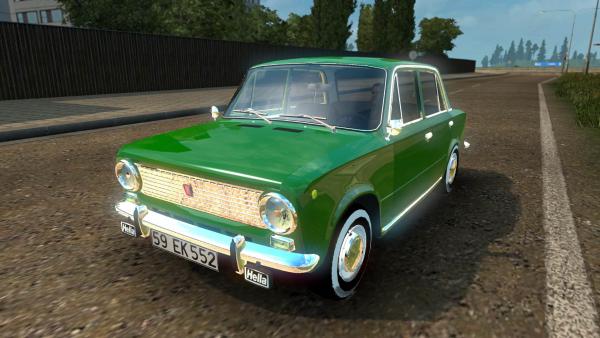 The iconic Fiat 124 Italian passenger car from Fiat was produced between 1966 and 1982. It's no secret that the car is the progenitor of such popular cars as the Turkish Tofas Serce or Soviet VAZ-2106, and many other well-known compact cars.

The Fiat 124 passenger car mod for Euro Truck Simulator 2 is implemented with its own classic interior with sophisticated full-fledged animation of instruments and switches. Having bought a car from any of the ETS 2 car dealerships, the player has an alternative to choosing a 1.2 or 1.4 liter engine installation with 65 and 83 horsepower, respectively. The modification has in its arsenal a rather impressive set of capabilities and spare parts for tuning, among them fog lights, tires with tires, an additional upper trunk, and even an opening soft roof.

Dear site user, for cargo transportation by passenger car, do not forget to download and install the mod Passenger trailer for all ETS 2 simulator versions!
Fiat cars
Previous modNext mod

Turkish car Tofas Serce, the prototype of which was the Fiat-124, in the ETS 2 simulator has a very realistic appearance. In technical terms, the car is equipped with an engine and gearbox with...