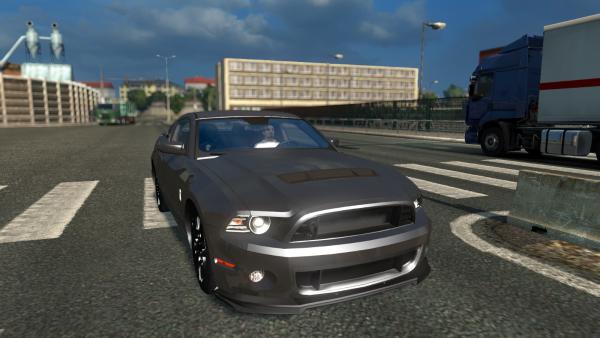 The Ford Mustang passenger car is a cult American passenger car, and the Shelby GT500 is its own improved brother, who has incorporated a more modernized filling. The legendary passenger car was equipped with powerful eight-cylinder engines, which made it possible to arrange high-speed races with sports passenger cars of the Porsche Panamera Turbo type. The car gained wider fame after filming in the popular movie: Gone in 60 Seconds.

The Shelby GT500 passenger car mod for Euro Truck Simulator 2 has three engines with a wide range of power, the installation of which is available to a virtual trucker when purchased at a car dealership or upgraded in a car repair shop. The player is also given the opportunity to choose any color, including a metallic shade. The authors successfully implemented the interior of the cabin, shining with an elite finish with prescribed animation of the instruments on the panel. When driving, the driver will pay attention to the individual control and behavior characteristics that are different from the standard settings of the ETS 2 simulator. Although the modification has a trial character, what is included in the add-on is quite suitable for the novelty of the game process.