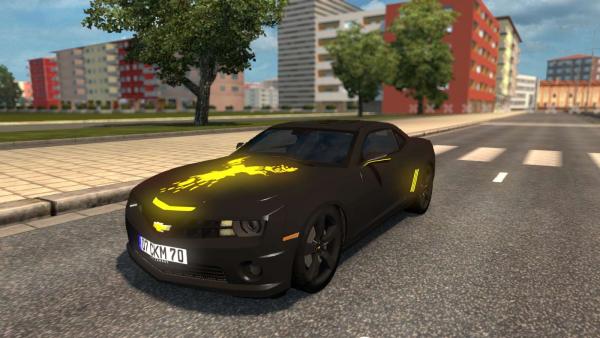 The legendary Chevrolet Camaro, which has been featured in many cult films, has more than half a century of history. The popularity of the sports car is so great that in almost all countries hundreds of fan clubs are open, and on the Internet you can find thousands of sites of similar subjects.

The fifth-generation Chevrolet Camaro sports car mod for Euro Truck Simulator 2 is equipped with a 450 horsepower engine and a six-speed gearbox, which allows you to compete in playfulness with the elite Porsche Panamera Turbo car. Unfortunately, the modification does not support body coloring in a custom color and tuning is completely absent, however, the authors of the add-on took care of adding original sound effects, which will positively affect the gameplay in the ETS 2 simulator.