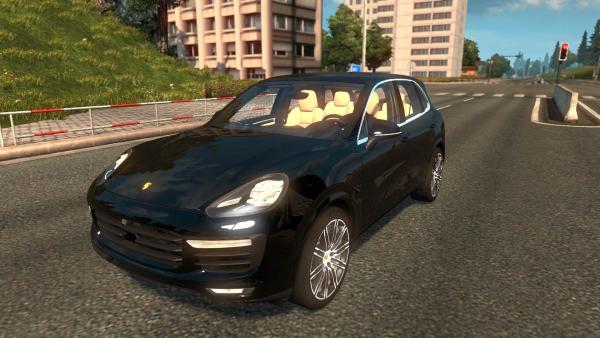 The sports crossover Porsche Cayenne begins its history in 2002, when it was first introduced for sale by the German company Porsche. Currently produced cars version Turbo S with a new, improved engine that is able to accelerate the car to a record 283 kilometers per hour.

The Porsche Cayenne Turbo S crossover mod for Euro Truck Simulator 2 is presented in the 2016 model year. The car will be a great addition to the fleet of luxury cars, such as the Shelby GT500, and the like, because when it was created, a high-quality three-dimensional model with an original interior was used, where the authors managed to recreate the full-fledged animation. When purchasing an Iveco car dealership, an ETS 2 sim player can install a 4.8-liter engine with 562 horsepower under the hood and select a gearbox for 6 or 8 speeds that is suitable for your needs.

Mod urban elite crossover BMW X5M perfectly repeats all the features of a real existing passenger car. The virtual car is equipped with an original engine with a volume of 5.5 liters and a capacity...

The Shelby GT500 is an improved version of the iconic Ford Mustang, featuring more sophisticated technical features and luxury interior and exterior finishes. Car from the movie: Gone in 60 seconds...