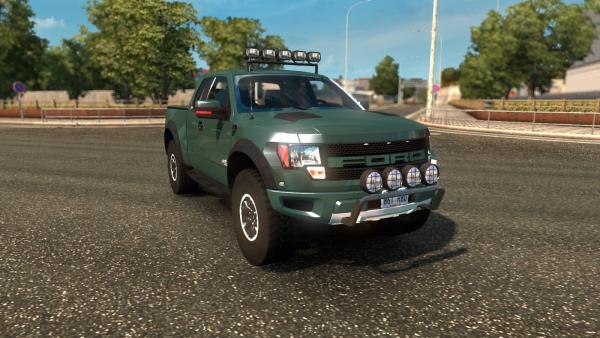 In 2011, an updated updated modification of the Ford F-150 SVT Raptor off-road car was presented to a wide audience of motorists. By retooling, the Raptor Supercab received a new, more powerful 411 horsepower engine with a 6.2-liter capacity, and an improved six-speed automatic transmission. The engineers also redesigned the suspension, after the modernization of which, it became possible to install larger diameter wheels thanks to the extended wheel arches. The car will ideally fit into the new world of the author’s map of Severe Russia Baikal, where the car will show all its best qualities in off-road conditions.

The Ford F-150 SVT Raptor Supercab car mod for Euro Truck Simulator 2 received a solid tuning kit, so the ETS 2 sim player will be able to re-equip his personal steel horse at his discretion in the workshop or car dealership. The authors of the modification changed the chassis, now Ford received two suspension options, with a low landing for driving on highways, and a high one for off-road driving, with each option having its own control and behavior physics. In addition, the addition contains seven types of wheels and three types of wheels, as well as an assortment of interchangeable grilles, bumpers, lighting fixtures and many other exterior items.