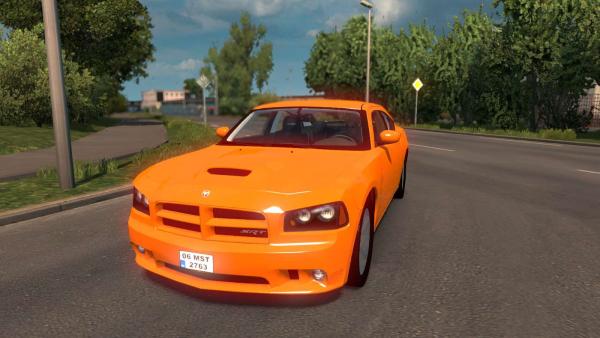 The cult passenger car Dodge Charger first left the assembly line in the mid-sixties, and immediately won a worthy place among motorists, not only in North America, but throughout the civilized world. In 2009, the car underwent a technical and design update. Aggressive appearance, coupled with a powerful filling, allowed the car to have a rebirth, all of which can be experienced on the racetrack directly in the ETS 2 simulator.

The car mod Dodge Charger SRT8 for Euro Truck Simulator 2 is made in accordance with the original dimensions, in the sedan. It is equipped with an engine of 344 horsepower and a six-speed gearbox. The interior has its own animation and its own accessories. The authors prescribed their own control physics and the sound of the motor. From external tuning, a virtual trucker can use tinted windows, an antenna, a spoiler, exhaust pipes and a small number of small items of exterior bodywork. The developers have not forgotten to add the oil car and genuine wheels with tires.

Dear site user, for cargo transportation by passenger car, do not forget to download and install the mod Passenger trailer for all ETS 2 simulator versions!
cars Dodge
Previous modNext mod

The sports car BMW M6 F13 is produced by BMW since the beginning of 2012. Its virtual version in Euro Truck Simulator 2 looks very realistic, thanks to a high-quality car model and textures. On the...

The luxury crossover Jeep Grand Cherokee SRT8, the dream of motorists all over the world, recreated in excellent quality with prescribed control physics. The authors managed to transfer to the...