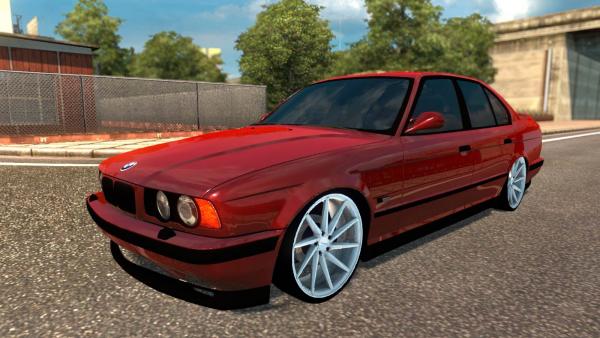 In the second half of the eighties of the last century, BMW Motorsport engineers thought about the sports version of the popular BMW 5-series E34. And now, after some time, the light was seen by a new, improved passenger car BMW M5 E34, the release of which lasted until the end of 1996. The popularity of this model was so high among motorists that to this day it can be found not only on European roads, but also on American highways.

The mod of the BMW M5 E34 passenger car for Euro Truck Simulator 2 has practically no drawbacks, the player of the ETS 2 simulator has the option of painting the car in any color, including metallic. The authors of the modification perfectly realized the model of the body with the original interior of the cabin, in which the animation of the instruments is prescribed. Of the power units, there are six-speed gearboxes, as well as two engines for 2.0 and 3.8 liters, with a capacity of 170 and 340 horsepower, respectively. Unfortunately, BMW does not have external tuning items, however, five types of branded wheels with tires will more than cover this disadvantage.

The BMW M5 F10 passenger car mod has a distinctive feature among similar additions; in the car dealership, when buying, you can choose the body option with an open hood, trunk lid and doors. In...

Executive SUV Volvo XC90, created using the original three-dimensional model of the body and detailed interior. When buying, two color options for the interior are offered, a pair of engines for 170...